MARTIAL ARTS FOR BOTH CHILDREN AND ADULTS!

Breaking The Bat! Achieving your Goals! 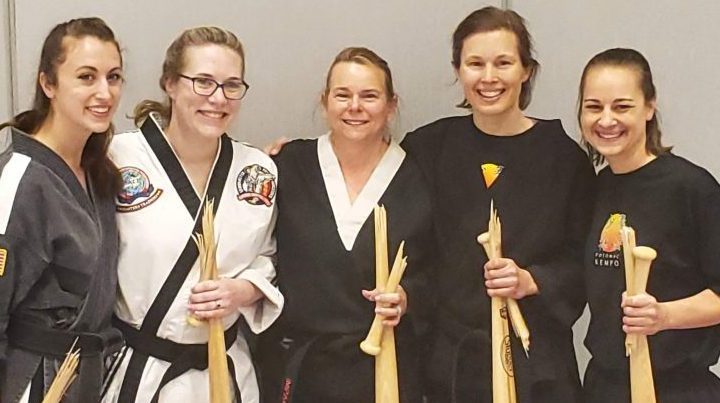 This Challenge was 2 years in the making.  At my first ProMac conference here in Denver – 2 friends broke bats at the training session.  I couldn’t attend that night, but thought it was so cool that they were able to do that.  Watching the video – they exhilarated from breaking their own bats.

Then next year, when the conference came around, I hesitated to sign up.  I was taking my instructor test and was focused on that.  I watched the videos of the others who broke their bats and again, thought it was something I would like to be able to do.

This year, I was going through the agenda and there it was again.  I hesitated, but as Jim and I were talking about the courses, he said “why not?”.  I couldn’t give an answer as to why not, so, I signed up.  I was nervous. I didn’t plan to tell anyone until after I broke the bat!  However, Jim decided to tell the entire school for me.  As we talked about the breaking seminar, Jim announced to the student body, that I would be breaking a bat.

My Instructor and Coach, Master Chip Townsend is a world champion board breaker.  He holds 14 breaking titles.  I took his breaking seminar at Master Scott’s school.  He was very inspiring, and I felt like I could break anything that he put in front of me – and I did!  After the seminar, I had a chance to talk to him and let him check out my technique.  His words were, you are going to have to hit harder!

I came back to the school the next day and practiced technique – I thought I had the power!  It was there, but would it be enough?  I was losing confidence.  I needed to do this for myself and my students.  I teach that we never give up – no matter how nervous or scared we are.  I needed to prove to myself, that I could do it.

We met on Friday to practice.  Again, he told me “more power”.  I was trying hard to get the power and lost my technique.  I wasn’t chambering.  I took a deep breath and hit the pad with technique and power – I had it.  It was up to him whether we could move forward.  He didn’t tell me no, so, I was still on.  We met again Saturday for more practice.  There were five of us girls breaking bats.  We met again, and Master Townsend determined I had the heart and determination to proceed.

Still, I was nervous, I had doubts – hearing you need to have more power over and over, made me wonder if I had it in me.  I received messages from students wishing me luck – I knew I couldn’t let them down.

We came in Sunday morning; we would be breaking at 8 am.  Myself and 4 other ladies – they were all younger than I am by at least 15 years or more.  We warmed up and he gave us our lineup.  I would be 2nd.   I was grateful I wasn’t first!  We hit the pad and again, I heard more power!!  I was going to do this.

It was time!  We had an audience, warmed up and got ready to break.  I was excited, nervous, scared.  Allison was first – she went up, hit the pad and nailed the bat.  It was my turn.  I went up, hit the target and then the bat.  I went through it without any problem.  I was excited and confident!  I was so pumped that I went through on the first time!

I teach my students that they can do anything they put their minds to.  It is always okay to be nervous and scared.  It’s when we overcome the nervous and scared and find the power within, that we become better – better students, teachers, and people.  We find the confidence to do what we need to do.

Now, a challenge – find something that you are nervous about trying – and go out and do it!  Remember to find the strength and you can do whatever you put your mind to.

Michele Evins the Co-Owner and Lead Instructor for Impact Taekwondo. A Third Degree Black Belt, She works everyday to make sure that Impacts Curriculum and how we teach are up to her tough standards and high expectations. Michele can be reached at michele@impactkd.com.

Discover why parents love our Preschool & Kindergarten Martial Arts program in Highlands Ranch . It's the perfect blend of gross motor, personal development and character enrichment. Find out why 100's of families, just like yours, trust Impact Taekwondo

Parents love our Kids Martial Arts program in Highlands Ranch , because it's the perfect blend of self defense, personal development and character enrichment. Find out why so many families, just like yours, love and trust Impact Taekwondo

Fitness and Self Defense, two major goals for anyone looking for Adult Martial Arts in Highlands Ranch. It’s time to change up your work out and get the results you’ve been looking for.

Stop trying to reinvent the wheel, Birthday parties should be fun, not a ton of work! Enjoy watching your kids have fun!

This summer, give your child an experience they won't forget. Martial arts changes lives.

Fill out the form below to

Get Your Spot Now!